What are the system requirements for FluidDraw P6?

FluidDraw P6 runs on Windows 7 or higher with .Net Framework 4 installed including Windows 10 (both 32-bit and 64-bit). We recommend a dual core processor and at least 2 GB of RAM for 32-bit machines and 4 GB RAM for 64-bit PCs, respectively.

Within the program options of FluidDraw P6 you can select to search for updates and if you whish to automatically download them on each start of the program.

Can FluidDraw P6 be installed to a network drive?

Note: During the client installation, no files other than the CodeMeter drivers are copied to the local hard disk and only a shortcut to the network drive is created. In particular, this means that only the server installation has to be updated for subsequent program updates; intervention on the individual workstation PCs is no longer necessary afterwards.

A client installation is licensed in the same way as a complete FluidDraw installation. Either a license of your license ticket is installed locally on the workstation PC or the licenses are available via a license server in the network.

Why can't I access my network drives from FluidDraw P6?

This is related to the User Account Control (UAC) settings. If FluidDraw is run directly after the installation or an update with elevated rights, the application will run under a different user account than the one under which the network drives are available.

If you restart FluidDraw without elevated rights, you can access your network drives again. Alternatively, you can make an entry in the registry that makes the network drives of your user available under elevated rights. You will find instructions including further background information with an Internet search for the term “EnableLinkedConnections”.

What type of licenses are availabe for FluidDraw P6?

The licenses can be imported into a license server and shared over the network, as well as used locally on a PC or notebook. A physical USB hardware key, such as the CodeMeter stick used for version P5, is not required. However, it is also possible to import licenses into an existing CodeMeter stick. Your licenses are managed with the Online Licenses Activation Wizzard (short Activation Wizzard), which is installed together with FluidDraw.

Where can I find the activation wizard?

Alternatively, the executable file CodemeterActivationWizard.exe can be found in the program directory of FluidDraw P6 in the subdirectory /bin. This is a stand-alone version of the Activation Wizard and can also be used on PCs without FluidDraw installed.

The Activation Wizard runs under Windows 7 or higher with the .Net Framework 4 installed. For successful license management, the following requirements must also be met:

I have received a ticket number. How can I activate my license(s)?

The ticket number you received from the licensor after purchasing represents your digital licenses for FluidDraw. You can now either import these digital licenses into a license server or locally onto your PC. A direct Internet connection is required.

Activation of a license on a single PC:

The main steps are briefly described below. A detailed description including screenshots can be found in the first chapter of the FluidDraw manual.

Setting up and importing the licenses to a license server:

In order for a computer in the network to become a license server, the following steps must be performed. For further details and screenshots, please refer to the first chapter of the FluidDraw manual.

Can licenses for FluidDraw P6 also be imported into an (existing) CodeMeter USB connector?

Yes, that is possible. The activation wizard for activating FluidDraw licenses via a ticket number also supports the import of licenses into an existing CodeMeter USB stick.

How can a local license be transferred to a new PC?

For this, you need your ticket number, which you received after purchasing FluidDraw.

Call up the activation wizard on the outgoing PC and enter your ticket number. You can now use the wizard to deactivate the local license and this license will be released again on the license server. You can then activate FluidDraw P6 as usual on the new PC with the ticket number.

When are FluidDraw 365 subscription licenses renewed?

Unless the FluidDraw 365 subscription is cancelled, the licence on Festo’s servers is extended by one year on the day the contract was concluded. If, for example, the contract was concluded on May 03, 2019 the contract will be renewed on May 03 of the respective following year. The subscription license is valid for one year plus a grace period of seven days. After the subscription contract has been renewed, the license renewal must be processed within these seven days, otherwise FluidDraw will no longer start. However, it is still possible to perform a license renewal afterwards.

How can I check the expiry date of a license?

Open the CodeMeter Control Center by klicking on the respective icon in the info area of the task bar. 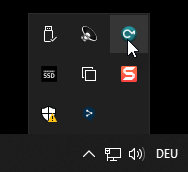 Launch the WebAdmin by pressing the corresponding button at the bottom right of the control center. 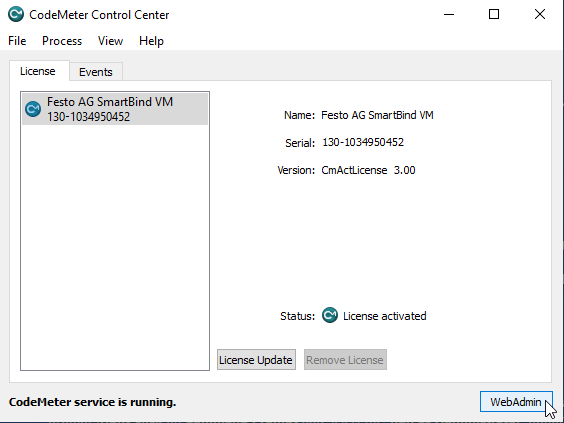 The licenses are listet in the “Container” tab. In the following example the FluidDraw subscription runs until Dec. 23, 2020. On this day the license is automatically renewed on the Festo servers. The locally installed license, that you can see in the screenshot, is valid until Dec. 30, 2020 because it includes the seven day grace period. Within these seven days the local license should be renewed. An internet connection in needed therefore.

How do I renew a license?

For the license renewal FluidDraw version 6.0k from 11/25/2019 or newer is needed. An update can be initiated directly from FluidDraw via the main menu item “Help” => “Check for Updates” if an Internet connection is available. Alternatively you can download the update from our Download page for FluidDraw P6.

Starting with version 6.0k, the license is automatically updated when FluidDraw is started, as long as the subscription is still valid and FluidDraw has an Internet connection. Without an Internet connection or if automatic renewal is not possible, the license can be updated manually using your ticket. For this you need the program Codemeter Activation Wizard, which is located in the “bin” folder of the FluidDraw installation as “CodemeterActivationWizard.exe”. More details about the Codemeter Activation Wizard can be found in the FluidDraw manual or in the program help under “Installation and Licensing” - “License Management”.

You are most likely using a FluidDraw version older than version 6.0k. Unfortunately the renewal does not work with an older version. Proceed as described under “How do I renew a license?”.

Please note that the license on Festo’s servers is extended by one year on the day the contract was concluded (see “When are FluidDraw 365 subscription licenses renewed?”).

Is it possible to quickly assign terminators with product data to multiple connectors?

From version 6.0c on you have the possibility to select several connectors at once. Pneumatic and hydraulic connectors can then be assigned a connection terminator via the context menu or the common properties.

To do this, proceed as follows:

Can I create my own symbols with FluidDraw?

Existing symbols from the standard library cannot be changed, but you can of course create your own symbols in FluidDraw. To do this, proceed as follows:

Now you can use the new symbol from your user library just like a symbol from the standard library in your projects.

As an alternative to creating your own macro object in steps 1 and 2, you can also import a completely drawn symbol in DXF format. To do this, use the main menu item DXF Import… in the File menu.

What are the differences between parts lists in version 5 and version 6?

The reports in version 6 have been greatly improved compared to the lists in version 5, so that they can be better adapted to individual requirements. Previously, tube lists or cable diagrams, for example, were fixed and could not be supplemented with additional columns. With the standard templates for reports, we try to simulate the predefined lists of version 5. However, there are some points that work somewhat differently in the new reports as compared to the known lists of version 5.

In the case of parts lists, this applies especially to the automatic listing of attributes. In the old part lists of version 5, every newly added user-defined attribute was automatically listed in the parts list. This is no longer the case with the new part lists in version 6. Certain columns are preset in the standard template for the item parts list and are not automatically supplemented with new columns when new attributes are defined. This means that if new user-defined attributes are added, they must be added manually via the part list properties. You do this by opening the parts list properties and switching to the Column selection tab. There you can select from the list on the right those attributes and properties that you want to appear in the parts list.

Another difference to version 5 is that user-defined attributes no longer automatically overwrite catalog attributes with the same name. Instead, certain columns can be grouped together in the new reports.

Why are my custom attributes 'Type' and 'Vendor' not displayed in the BOM?

The reports in version 6 differ fundamentally from the simple parts lists and tables in version 5. By popular request, we have greatly enhanced the opportunities for evaluating projects in version 6, but some concepts have changed as a result.

The templates supplied for parts lists and accumulated parts lists are designed to list components with stored catalog data from the Festo catalog or from your own product database. If components are inserted via the menu items Insert => From Festo catalog or From user database or subsequently assigned catalog data via a part number, the evaluations immediately contain the appropriate data. The situation is different if user-defined attributes for type, supplier etc. are used and these are to be listed in the parts list. To do this, the supplied template must be modified accordingly. This is possible in the properties of an report in the Column selection tab.

On the left-hand side of this tab, a list is displayed with all properties of the components contained in the project that are available for evaluation. These are the properties of components, lines, terminal strips and cables. The properties are indicated here with their name. The following challenge arises here, especially for the attributes:

All available attributes are listed in the list of available columns. It may now happen that different attributes have the same name in the current catalog language. The following composite picture illustrates this. On the left side you can see the properties of a component and a connection line of the project. The displayed user-defined attributes are numbered from top to bottom. On the right side you see all available columns for the parts list. There the corresponding attribute number is shown next to the respective column so that the mapping is visible. 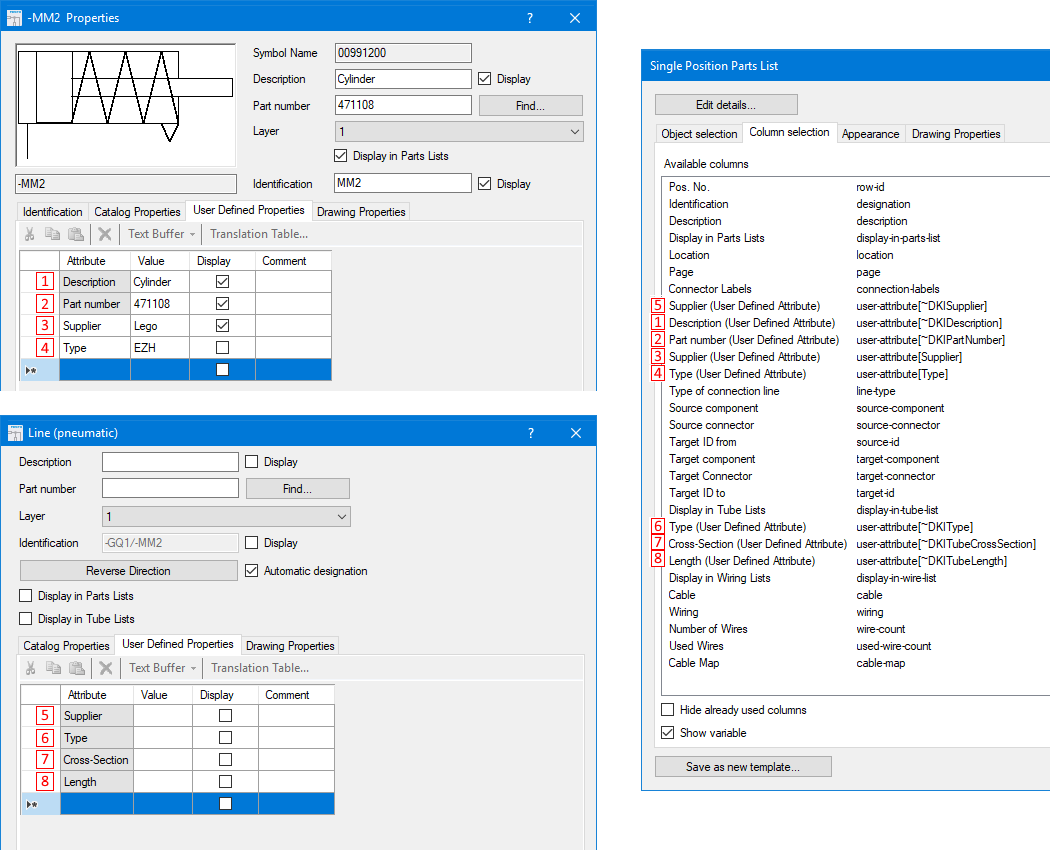